The Session was presided by H.E. Ms. Nazhat Shameem Khan, Ambassador and Permanent Representative of Fiji to the United Nations Office at Geneva and President of the Human Rights Council. Ambassador Khan was elected to the Presidency of the Council for its 15th cycle from 1 January 2021 to 31 December 2021 and is only the third female to serve as President of the Council and the first national of a Small Island Developing State (SIDS) and of the Pacific.

Ambassador Khan opened the session and the High-Level Segment (HLS), on Monday 22 February 2021.   Also speaking during the opening session were H.E. Mr. Volkan Bozkir, President of the 75th Session of the United Nations General Assembly; H.E. Mr. Antonio Guterres, Secretary-General of the United Nations (UNSG) and Ms. Michelle Bachelet, High Commissioner for Human Rights (HCHR) and H.E. Mr. Ignazio Cassis, Head of the Federal Department of Foreign Affairs of the Swiss Confederation, on behalf of the host country.   Secretary-General Guterres took the occasion of the Session opening to recall his launch, one year prior, of the report entitled “The Highest Aspiration: A Call to Action for Human Rights” which also coincided with the seventy-fifth anniversary year of the United Nations.  The Secretary-General asserted that COVID-19 had deepened pre-existing divides, and opened up new fractures, including fault-lines in human rights. The lives of hundreds of millions of families had been turned upside down — with lost jobs, mounting debt and steep falls in income. The disease had taken a disproportionate toll on women, minorities, persons with disabilities, older persons, refugees, migrants and indigenous peoples.  Vaccine equity was ultimately about human rights. Vaccine nationalism denied it.

The High Level Segment included speeches by 130 State representatives and other dignitaries including Ministerial representatives from 40 of the 47 Members of the Human Rights Council and representatives of intergovernmental bodies such as H.E. Ms. Patricia Scotland, Secretary-General of the Commonwealth and H.E. Mr. Joel Hernández, Commissioner and Vice-President of the Inter-American Commission on Human Rights, Organization of American States.

The Hon. Darren A. Henfield, M.P., Minister of Foreign Affairs of The Bahamas delivers the national statement during the High-Level Segment of the 46th Session of the Human Rights Council on 24 February 2021 via pre-recorded video message [Photo credit: UN Photo]

The Hon. Darren A. Henfield, M.P., Minister of Foreign Affairs of The Bahamas delivered the national statement during the High-Level Segment of the Session via pre-recorded message, on 24 February 2021.   In his address to the Council, Minister Henfield highlighted the challenges posed by the onslaught of the COVID-19 pandemic, noting that while The Bahamas was no stranger to storms, having experienced the devastation of Hurricane Dorian, the strongest hurricane to hit The Bahamas, the COVID 19 pandemic was “a storm of an entirely different category” which “swept across borders with speed and ferocity, tearing down economies, overwhelming health care systems, devastating lives and livelihoods and laying bare inequalities”.  He told the Council that the response of The Bahamas had required significant sacrifices at a time when the country’s tourism sector, the key driver of the economy, had been severely hindered by the pandemic.

Minister Henfield also conveyed that the COVID-19 pandemic had exacerbated the inherent vulnerabilities faced by The Bahamas and other Caribbean SIDS such as climate change, increased frequency of natural disasters, vulnerability to exogenous shocks and heavy indebtedness.  While reaffirming that these countries were committed to “building back, better” to effectively address the economic impacts of the pandemic, he also underscored that they required more favourable financing arrangements which were not conditioned by skewed income per capita levels.  Minister Henfield therefore called on the international community to give greater weight to the development needs and vulnerabilities of States such as The Bahamas, when determining access to international development financing.

Minister Henfield further highlighted that The Bahamas is fully committed to “leaving no one behind”, promoting gender equality as well as social and economic empowerment, reducing poverty and inequalities, safeguarding civil society space and protecting the rights of the most vulnerable, including children, persons with disabilities, the elderly and at-risk youth.

He closed with a call to the international community to unite to bring about “not just a new normal, but a better, fairer and more equitable normal”.

The Bahamas participated actively in the remainder of the 46th Session, including in its capacity as Vice-President of the Human Rights Council which involved regular attendance at meetings of the HRC Bureau and chairing meetings of the Council as well as through the delivery of a number of statements in the national capacity and on behalf of the Caribbean Community (CARICOM) Group in Geneva.

The statement conveyed that the COVID-19 pandemic has shone a spotlight on what many People of African Descent have always known – that the legacy of historical injustices against them persists, including through inequalities in accessing health services, the disproportionate effects of climate change, inequalities in distribution of the benefits of globalization as well as stigma, discrimination and violence to which people of African Descent continue to succumb.  The intersection of race with gender, disability, class and other factors, further compounds the plight.  It was further asserted that these realities are antithetical to the fundamental principles of the inherent dignity and worth of the person and of equality among human beings, as enshrined in international instruments for the promotion and protection of human rights. 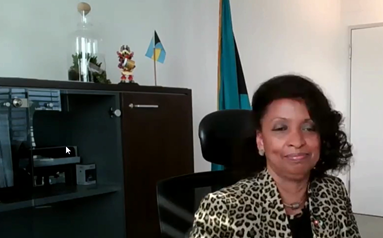 H.E. Ms. Keva L. Bain, Ambassador/Permanent Representative of The Bahamas in Geneva delivers a statement on behalf of the CARICOM Group in Geneva during the General Debate under agenda item 3 of the 46th Session of the Human Rights Council on 9 March 2021 [Photo credit: UN Webcast]

H.E. Keva L. Bain, participated in a virtual event held on 16 March 2021 in the margins of the 46th Session to commemorate the International Day of Remembrance of the Victims of Slavery and the Transatlantic Slave Trade.  The Bahamas was invited to participate in its capacity as focal point of the CARICOM Group in Geneva on human rights matters.

In her statement, H.E. Keva L. Bain highlighted that “the current pandemic of COVID-19 has disproportionately affected vulnerable communities and countries, particularly those already ravaged by developmental inequities that can be traced to the enslavement of Africans and People of African Descent”. It was also recalled that “through a joint partnership, the Member States of CARICOM and the African Group in New York, sought to make a reality the construction of a Permanent Memorial to the Victims of Slavery and the Transatlantic Slave Trade, at the UN Headquarters [in New York]”.    It was conveyed that “the ‘Ark of return’ memorial still stands as a poignant symbol in honour and remembrance of those 15 million women, children and men, who suffered at the hands of slavery.  It also continues to raise awareness about the dangers of racism and prejudice that continue to exist today”.  She also called on “The UN and Member States alike….[to] continue striving for the achievement of full equality and for inclusive institutions and societies where all people are equal, where one’s prospects and attainments are not limited or marked by ethnic background or the colour of one’s skin and where all people, including People of African Descent, can both contribute to and benefit from the results of our collective human progress”.  Ambassador Bain also emphasised the critical role of youth in combatting racial discrimination and called for their empowerment to fully and meaningfully engage in efforts to address racism.

08.03.2022 President of the Human Rights Council appoints members of Permanent Forum on People of African Descent

The United Nations Human Rights Council held its forty-seventh regular session from 21 June to 14 July 2021 under the presidency of Ambassador Nazhat Shameem ...

The Bahamas elected to serve as a member of the Bureau of the Human Rights Council.